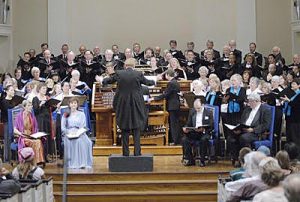 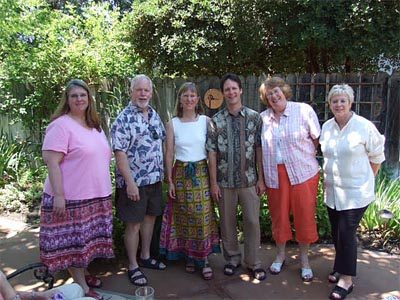 Chora Nova members join singers from other local groups in performing Mozart’s Requiem, September 11, 2006. Chora Nova women still wear the aqua scarves that Aparna Ewing created for the occasion.In 2006, 16 members of the former Baroque Choral Guild, or BCG, found themselves stranded without a choral home. BCG, long based in both Palo Alto and Berkeley, had made the difficult decision to eliminate the Berkeley half of its operations. Commuting to Palo Alto weekly for rehearsals, instead of monthly as before, was just not workable for most of the Berkeley singers. We met to discuss our options. Merging with another East Bay chorus was the most obvious course, but it soon became clear that no group would accept all 16 singers. Diane Keech was the first to articulate what many were feeling — that it was “all for one and one for all.” We weren’t willing to split up or be “cherry-picked.” Around this time, Paul Flight’s name came up as a possible Artistic Director. Already a noted singer and conductor, he had just arrived in the Bay Area and was eager to start a new group on which he could put his own stamp. At a mutual audition just before one of the last BCG rehearsals in Berkeley, Paul liked what he heard from us, and we were impressed by his conducting style. We had found a good match.

But getting a new group off the ground financially was a major obstacle, and at least one member with extensive experience in arts management believed it couldn’t be done. Undaunted, Paul went home and drew up a plan for the whole first year, including all the music for the concert season as well as a strategy for paying for it. The fledgling group received financial help through the Laney College Arts Alliance (which helped pay Paul’s salary for the first several years) and from First Congregational Church (which provided discounted space for several of our earliest performances). We rehearsed the first year at Crowden School, also at a reduced rate.

Our very first performance actually took place even before rehearsals began. Along with several other choruses, the group participated in in a performance of the Mozart Requiem at First Congregational Church on September 11, 2006, in remembrance of the World Trade Center tragedy five years earlier. For that occasion, Aparna Ewing came up with the idea of identifying us as a group with turquoise silk scarves for all the women singers, making them herself. We are still using that concept and color scheme — and many of her original scarves.

Our first Board helped get the group off the ground. Sandy Banks, treasurer, came up with the idea of asking donors to underwrite our orchestra members and soloists, a very effective fund-raising idea that we are still using today. Margaret Garms formed the corporation, wrote its bylaws, and shepherded us through the process of getting tax-exempt status. Suzanne Young applied her discerning artistic and editorial eye to our programs and CD covers. Rick Stober, our first president, dubbed himself the “Bossa Nova” and ended each week’s pre-break announcements with the cry, “Cookies!” Margriet Downing rounded out the first Board and provided invaluable help with concert production.

Our first concert featured works by Michael Haydn, brother of the more famous Joseph Haydn. We were accompanied by a wind ensemble — no strings. The concert was held the weekend before Thanksgiving, the only date that worked with the venue and the instrumentalists — and it turned out to be an excellent choice because it did not conflict with any of the many other concerts traditionally held in December. We have followed that tradition ever since.

Since 2006 Chora Nova has continued to grow in both size and in musical confidence and ability. We are very pleased to share our exciting programs with you and hope you will continue to enjoy Chora Nova concerts for years to come!