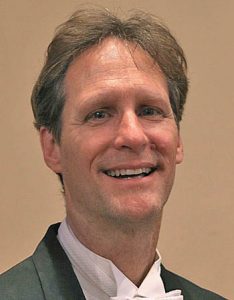 Paul Flight, who has served as Chora Nova’s Artistic Director since the group’s founding in 2006, is a noted conductor and countertenor. Dr. Flight is artistic director of two other fine Bay Area choruses as well: the California Bach Society, which specializes in historically informed performances of Baroque and Renaissance music, and Schola Cantorum of San Francisco, a professional chamber choir.

For many seasons he was principal conductor of the Madison Early Music Festival in Wisconsin, where he directed masterworks by Bach, Telemann, Vivaldi, Purcell, Dufay, and Guerrero. He has been a visiting professor at the University of California at Berkeley, directing the University’s top choral ensembles, and at UC Santa Cruz, directing the University Chamber Singers, and at Mills College, where he lectured on music history and musical form. Also at Mills, Flight conducted an operatic double-bill production of Holst’s Savitri and Milhaud’s Les Malheurs d’Orphée, and in addition directed a special concert by Schola Cantorum of San Francisco in celebration to mark the publication of Professor Nalini Ghuman’s book, Resonances of the Raj: India in the English Musical Imagination.

Flight earned his doctorate at Indiana University, where he studied conducting with Robert Porco. His research focused on the Venetian composer Giovanni Croce (1557-1609), and he has recorded a program featuring Croce’s works for Harmonia, a nationally syndicated radio show. He as appeared as a guest on three of KALW Radio’s performing arts programs, My Favorite Things, Voice Box, and Open Air.

An accomplished singer in his own right, Dr. Flight performs opera and oratorio internationally. At the Edinburgh International Festival, he performed with the BBC Scottish Symphony Orchestra in John Adams’ El Niño. He has performed the first and third countertenor roles (Balthazar and Gaspar) in this work with the Los Angeles Philharmonic, Den Norske Opera in Oslo, the Atlanta Symphony Orchestra, at Chicago’s Ravinia Festival, and at the Kennedy Center in Washington. He has sung the central countertenor solo in Bernstein’s Chichester Psalms with the Cleveland Orchestra and at the Cincinnati May Festival. When he sang the title role of the highly acclaimed Oakland Opera production of Glass’s Akhnaten, Joshua Kosman of the San Francisco Chronicle described his singing as “pure and regal.” He sang the U. S. premiere of Unsuk Chin’s Cantatrix Sopranica with the Los Angeles Philharmonic, and also performed it with the Berkeley Symphony under Kent Nagano.

Dr. Flight’s interpretations of 18th-century operatic and concert repertoire have also been critically acclaimed. He has performed the title role in Handel’s Solomon, the role of Montezuma in Karl Heinrich Graun’s Montezuma, and that of Dardano in Handel’s Amadigi di Gaula, and sung the alto arias in Bach’s B Minor Mass at Festival Mozaic in San Louis Obispo. In addition he has soloed with both California Bach Society and Chora Nova: his singing of the alto arias in CBS’s performance of Bach’s St. John Passion earned praise for “the power of his attractive voice” and for his ”flawless technique which was fully equal to the florid passages and long phrases.”

A versatile artist, Flight has performed with Sting in his Songs from the Labyrinth concerts at Disney Hall. He has sung in many outstanding professional ensembles, including Theater of Voices, Pomerium Musices, and the Waverly Consort. Dr. Flight has recorded for the Dorian, Harmonia Mundi, and Glissando labels.